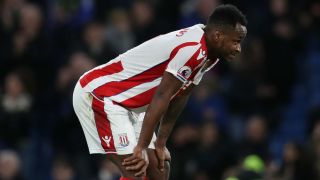 The milestone underlines just how much of a nosedive Berahino's career has taken after such a promising start to life in the Premier League.

Not only did his last senior goal come at a time when Barack Obama still had over a year left in office as president of the United States, but many of Berahino's performances in that time have shown few signs of improving.

He has played 2,324 minutes across 42 matches since that goal, attempted 55 shots on goal and hit the target with 20 of them.

He has also taken three penalties, all of which were missed.

It is a remarkable drought for a player who caught the eye in England's top flight when he scored the winning goal for West Brom against Manchester United at Old Trafford in September 2013.

Since then, he has gone from a 20-goal season and links with Tottenham to a reported £12million move to Stoke, disciplinary problems and even a recent rant against paparazzi near his home.