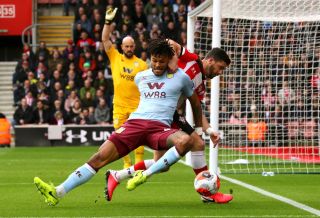 Tyrone Mings has urged the struggling Aston Villa squad not to become “fractured”.

The defender admitted Villa were well below par as they slumped to a 2-0 defeat at Southampton to deepen their relegation fears.

“We’re in a relegation battle and the minimum requirement is to fight and battle and we didn’t do that,” Mings told the club website.

“We can’t have any complaints because it wasn’t good enough. We didn’t start well, we didn’t get into the game.

If nothing does change then next weekend’s Carabao Cup final against Manchester City could be a chastening experience.

“We’ll figure it out behind closed doors,” added Mings.

“The last thing we need to do now is fracture and lose faith in each other, so we’ll prepare for the League Cup Final and it might be a welcome distraction from the league.”

Goals at either end of the match from Shane Long and Stuart Armstrong eased Saints to victory and moved them comfortably into mid-table.

They are nine points ahead of Villa but manager Ralph Hasenhuttl insists they are not safe yet.

He said: “34 points maybe is not enough so we need more. We don’t think about being safe yet.

“We’ve stretched the distance so it’s good for us. In total it was one of our best home games so far.”