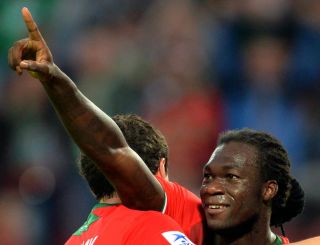 Al Ahli, Al Shabab and Al Jazira all recorded wins a day earlier to strengthen their grip on the AFC Champions League places.

However, Al Sharjah were unable to follow suit as they could only claim a 1-1 draw with sixth-place Al Wahda - Ahmed Khamis' equaliser cancelling out Sebastian Tagliabue's third-minute opener.

It means third-placed Al Jazira are now two points clear of Sharjah after Felipe Caicedo's brace helped the former to a 2-0 win over rock-bottom Dubai.

Adeilson was the match-winner for Al Shabab in their narrow 1-0 victory over Ajman, scoring 12 minutes from time after Abdulla Farak Marzouq had teed him up.

Ahmed Khalil and Grafite gave the hosts a two-goal lead either side of the break, before Haboush Saleh Habou pulled a goal back with 21 minutes left.

However, Ismaeel Al Hamadi and a Ciel penalty ensured Ahli took the points to keep them six points clear at the top.

At the other end of the table, Al Shaab put up a further point's difference between themselves and Dubai with a dramatic 3-3 draw against Emirates.

The hosts led 2-1 in Sharjah with just 13 minutes remaining thanks to goals from Michael N'dri and Mohamed Malalla Hassan, only for Luiz Henrique and German Herrera - with his second of the game - to find the net after 80 and 83 minutes respectively.

With Emirates on course for just their second away league win of the season, N'dri scored again with four minutes left to snatch the points.

Elsewhere on Friday, a Makhete Diop double helped Al Dhafra to a 3-1 win over Al Wasl while Ibrahima Toure's 13th league goal of the season ensured Al Nasr saw off 10-man Al Ain, who had Mirel Radoi sent off late on.