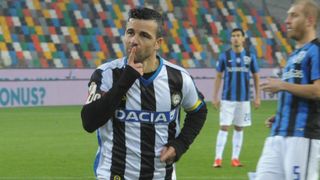 Antonio Di Natale wants to mark the full opening of Udinese's new stadium with another victory over Serie A champions Juventus on Sunday.

Cyril Thereau struck the only goal of the game as Udinese shocked Massimiliano Allegri's side in Turin back in August, beating Juve for the first time since 2011 and scoring their first league goal in five games against the Old Lady.

The revamped Friuli has been declared a sell-out for Juve's visit in what will be the first match for which all the refurbished areas of the ground will be open to the fans.

And Di Natale - who could be making his final appearance against Juve - is determined to mark the occasion in style.

"I'm sure that it will be a great match in a great stadium. We want to play a great match for our fans and especially for our president," he said to the club's TV channel this week.

"They are a really strong team, they are familiar with winning. It will be tough, especially for us, of course, but I'm convinced that they will struggle really hard to get a good result against us.

"It's hard to find weakness in their team, they are full of champions and experience. They are a fierce team, but if we do what we have to, we will make them struggle."

Juve's defeat in August began a run of just one win in six Serie A matches, but Allegri's side have hauled themselves firmly back into the title race thanks to nine victories in a row.

Allegri expects another stern test when they travel to Udine, however, especially given the spectacle of playing in front of a capacity crowd at the new ground.

"Udinese will pose a difficult test for us in what is a big week for them. Although they lost to Carpi last time out they are in decent form and will want to celebrate the full opening of their new stadium in style," he said.

"It'll be an important occasion for us too as we want to start the second half of the season in the best possible fashion and keep our objective alive of making Juventus history this year."

Juve have some concerns over the fitness of Alvaro Morata, who was forced to train separately this week due to illness, while both Andrea Barzagli and Mario Lemina are struggling with muscle injuries.

Alexander Merkel (knee) will miss the game for Udinese, while Giovanni Pasquale is a doubt with a similar issue.

Udinese have kept a clean sheet against Juve in their last two matches, but history remains firmly on the visitors' side. Prior to last year, they lost six times in a row to the champions, scoring just twice.

- Udinese have gained 10 points in their last five home Serie A games: they gained only one in the previous four.
- Juventus have completed the most dribbles this season (262) and have conceded the fewest shots (167).
- Juventus have conceded the fewest goals from inside the box in this Serie A (nine).
- Gianluigi Buffon could win his 250th Serie A game with Juventus.
- Paul Pogba has had a hand in three of the last six Juventus league goals (two goals, one assists), while he had a hand only in four of the previous 27.