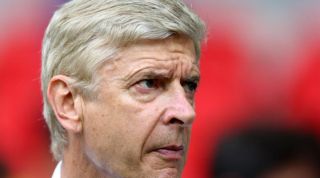 Arsene Wenger's side, buoyed by a busy transfer window that included the eye-catching acquisition of Alexis Sanchez, set tongues wagging with a 3-0 Community Shield win over Manchester City last week.

The London club were then required to show the kind of spirit that has been absent in recent years when beginning their Premier League campaign with a last-ditch 2-1 victory over Crystal Palace on Saturday.

The aim now is to secure their progression to the group phase of Europe's premier competition with the minimum of fuss.

Wenger, however, knows that a tricky test awaits as Arsenal attempt to reach the competition proper for the 17th successive year, beginning with Tuesday's away leg at Ataturk Olympic Stadium.

"I believe it will be a very tough game and a very important one for us. We want to be in the Champions League group stage," said Wenger.

"Besiktas had a convincing result against Feyenoord [a 5-2 aggregate win in the last round] and so for us we have the luck to play the first game away.

"We know what is at stake of course and want to be highly focused for this game."

Arsenal have good memories of facing Turkish opposition at this phase, having beaten Fenerbahce 5-0 on aggregate last season.

Wenger will be hoping, too, for another good performance from Aaron Ramsey.

The Welshman showed the kind of form that made him the talk of the Premier League last term against Palace at the weekend, decisively grabbing the winning goal.

Besiktas themselves are no doubt brimming with confidence as well having cruised past Feyenoord to reach this stage.

Goals from Mustafa Pektemek and Kerim Frei earned a 2-1 triumph in the opening leg of that contest before a Demba Ba hat-trick finished the job to complete a 5-2 aggregate success.

Besiktas are yet to begin their domestic season, with their opening match coming against Mersin Idmanyurdu at the end of August.

Wenger could opt to make changes against Besiktas as he felt striker Yaya Sanogo looked "jaded" against Palace, while Jack Wilshere suffered with sickness in the build-up to Saturday's game, although he was passed fit enough to start.

It remains to be seen what part - if any - Arsenal's World Cup-winning trio of Per Mertesacker, Lukas Podolski and Mesut Ozil will play as they have been allowed to return to training late following the Brazil showpiece and sat out the Palace game.