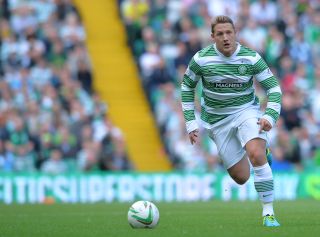 The midfielder sustained a hamstring injury in Saturday's 1-1 Premiership draw against Hibernian and is not expected to feature against the Dutch side at Parkhead.

Commons has become a key player for the Scottish champions since his move from Derby County and if he is ruled out as expected, the 30-year-old's absence will be a major blow for manager Neil Lennon.

"Kris knew straight away, he felt a pull and signalled to us," Lennon said.

"We don't think it's a tear, but if it is a strain it's a couple of weeks, so it's definitely not looking good for Tuesday. Losing Kris is a huge blow. He has been fantastic for us this season.

"He's at the top of his game and in great physical condition, so if he is out it will be a big loss."

Celtic are bottom of Group H after losing their first two games against Milan and Barcelona without scoring a goal and Lennon knows they can ill afford to slip up again.

"We can't lose it, put it that way," the former Northern Ireland midfielder said.

“We are four points worse off in the group than we were at this stage last season. We have a bit of work to do.

"Home form is important to us, but Ajax are a very good side. Let's not beat about the bush.

"They will give us plenty to think about, plenty of problems. But we are at home and I think we will be confident enough to take the game to them."

As well as almost certainly being without Commons, the Glasgow outfit will be missing suspended captain Scott Brown following his red card against Barcelona.

Adam Matthews (shoulder) and former Ajax man Derk Boerrigter (ankle) are also ruled out, while there are doubts over Mikael Lustig (hip) and Emilio Izaguirre (illness).

Ajax will also be looking for their first win in the group after Mario Balotelli's last-gasp penalty denied them victory earlier this month.

Stefano Denswil looked to have snatched a late win for Frank de Boer's side when he gave them a 90th-minute lead, but Balotelli rescued a point for Milan when he converted a controversial spot-kick with the last kick of the game.

Ajax, who are third in the Eredivisie table just as they are in Group H, were victorious 1-0 on their last visit to Parkhead back in August 2001 but they have not won away from home this season.