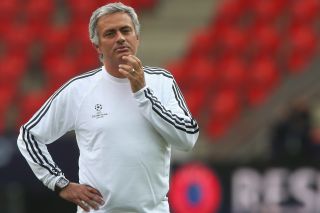 The Premier League won the UEFA Europa League last season, while they lifted the Champions League in the 2011-12 campaign, and they will be determined to claim the main prize again.

Wednesday's Group E clash at Stamford Bridge will be vital for the London club, with returning manager Jose Mourinho sure to demand a fast start from his men.

Chelsea and Basel are well acquainted, having met in the semi-finals of the Europa League last term, with Chelsea winning 5-2 on aggregate.

That success came under interim manager Rafael Benitez, though, with Mourinho in charge now as he looks to win the title for the third time.

Mourinho has won the Champions League at both Porto and Inter, but is yet to win it at Chelsea, coming closest in 2004-05 and 2006-07, when they reached the semi-finals.

Chelsea have not made an ideal start to the season, winning just two of their first four Premier League matches, while they lost to Bayern Munich in the Super Cup final on penalties last month.

As a result, they lie sixth in the Premier League table, with Saturday's 1-0 defeat at Everton fresh in the memory.

Cameroon international Samuel Eto'o made his debut in that fixture, but the 32-year-old striker was guilty of missing several chances.

Mourinho will expect more from the former Inter player, and Spaniard Fernando Torres may start as a result of his sub-standard performance.

Chelsea's array of young stars could all play big roles in the Champions League this season, with Oscar, Eden Hazard and Andre Schurrle all impressing in the early stages of the campaign.

Basel have their own stars to boast and among those is veteran forward Marco Streller, who has already racked up four goals in just five games in the Swiss Super League.

Their league form has been good, losing just one of their seven matches this season, and they sit third on the table as a result.

They beat Maccabi Tel Aviv 4-3 on aggregate before toppling Ludogorets 6-2 in the play-off round.