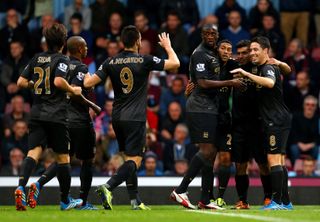 City bounced back from a home defeat against Bayern Munich in their second Group D game with consecutive 3-1 Premier League wins over Everton and West Ham.

The response from Manuel Pellegrini's squad after their chastening loss to the reigning European champions has been impressive, and they will be aware of the importance of gaining a positive result in the Russian capital.

City - who have failed to make it out of the group stages of the Champions League in the past two seasons - sit ahead of third-placed CSKA only on goal difference, and striker Sergio Aguero says Wednesday's match is must-win fixture for his side.

"We have to win, don't we? It's an important three points because then we play them at home," Aguero told CityTV.

"We won against West Ham away in the Premier League and now we have to win away in Moscow as well. We have to continue."

Pellegrini rotated his squad in Saturday's win at Upton Park, which came thanks to an Aguero brace and a late David Silva effort.

He selected an entirely different back four to the team that won against Everton, although that was slightly enforced by the absence of captain Vincent Kompany (thigh).

Kompany is still sidelined, as is fellow centre-back Martin Demichelis (knee), while Jack Rodwell (hamstring) has played just once this season as he battles for fitness.

City striker Alvaro Negredo has netted four goals in his last five matches for club and country, leaving Pellegrini with a selection headache over who is to partner Aguero, with Bosnian Edin Dzeko an unused substitute at West Ham.

Concerns over the state of the pitch at Arena Khimki - which is being used by CSKA as their Luzhniki Stadium is rebuilt for the 2018 FIFA World Cup - saw UEFA inspect the venue after weeks of heavy rain.

CSKA were forced to play their last Champions League home fixture against Viktoria Plzen - which they won 3-2 - in St. Petersburg but a repeat will not be on the cards after UEFA were satisfied with the condition of the pitch.

"We don't know what the condition of the pitch will be. We hope that UEFA allowed them to play the game there because it is a good pitch," Pellegrini said.

CSKA have won none of their last five league fixtures, form that has seen them drop to sixth in the Russian Premier League.

They lost 2-0 to title holders Zenit on Friday, in a match that saw Ivorian striker Seydou Doumbia return from a hamstring injury.

Goalkeeper Igor Akinfeev (knee) missed and is in doubt for City's visit, as is Alan Dzagoev (hamstring), while Latvian midfielder Aleksandrs Cauna (toe) will definitely miss the clash.