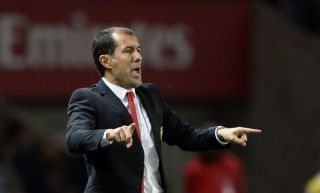 Jardim took over at the Stade Louis II in June after guiding Sporting Lisbon to second place in the Primeira Liga in his only season in charge of the Portuguese outfit.

Sporting were unable to overhaul fierce Lisbon rivals Benfica, who finished seven points clear to capture the league title, but Jardim will now get another crack at Jorge Jesus' men in Europe's premier club competition.

And the 40-year-old has good reason to be hopeful of a triumph given Benfica's highly disappointing form in the tournament so far.

Benfica were beaten 2-0 at home by Zenit in their opening Group C encounter and followed that up with a 3-1 loss at Bayer Leverkusen, meaning that they will most likely need to take all three points versus Monaco in order to have any chance of progressing to the knockout rounds.

By contrast Monaco have put themselves in a strong position in what is the principality club's first appearance in the Champions League in nine years.

The Ligue 1 club began with a tight 1-0 win over Leverkusen before producing a battling performance to claim a 0-0 draw with Zenit in a game in which they created the better goalscoring opportunities.

Monaco have also begun to show signs of life in the French top flight, recently holding defending champions Paris Saint-Germain to a draw before cruising to a 2-0 success against Evian last Saturday.

Despite their recent resurgence, Monaco have hardly been prolific in front of goal, netting 10 in as many games in Ligue 1, and will again be without star striker Dimitar Berbatov because of an ankle injury suffered in the draw with Zenit.

Defender Borja Lopez is yet to play a game for Monaco because of a knee problem while teenage forward Anthony Martial is also a doubt.

Centre-back Aymen Abdennour has been sidelined with a thigh injury since August but is in contention to feature after playing for Tunisia against Senegal during the international break.

Benfica have been boosted by the return of goalkeeper Artur after he missed the second round of group fixtures due to suspension.

Second-choice goalkeeper Julio Cesar is expected to be unavailable because of a back issue, while defender Jardel and winger Ola John are both doubtful because of thigh injuries as the visitors aim to claim their first points of the Champions League campaign.