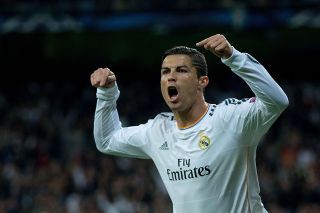 Cristiano Ronaldo scored twice in the first half - his sixth and seventh goals of the competition this season - either side of Fernando Llorente's equaliser, before Juventus saw Giorgio Chiellini sent off for an alleged elbow on the Portuguese international.

Chiellini, who conceded the penalty that handed Ronaldo his second, was shown a straight red card two minutes into the second period when it looked as though he had done nothing more than fend off the forward with his arm.

Carlo Ancelotti made four changes from Saturday's 2-0 win over Malaga, including the return of Iker Casillas in goal and Karim Benzema up front.

For Juventus, Martin Caceres was in action for the first time since suffering a knee injury in early September, the defender one of three changes from Sunday alongside Angelo Ogbonna and Arturo Vidal.

The visitors threatened as early as the second minute, Claudio Marchisio stinging the palms of Casillas with a rasping drive from 25 yards.

However, two minutes later Ronaldo put Madrid in front with a well-taken goal.

The Portuguese forward was slipped in by Angel Di Maria, before rounding Gianluigi Buffon and slotting home.

Midway through the half, Juventus drew level as Llorente fired home a rebound from six yards after Casillas had kept out Paul Pogba's back-post header from Caceres' cross.

Parity lasted for just seven minutes as Ronaldo netted his second of the night from the penalty spot.

Chiellini was adjudged to have brought down Sergio Ramos inside the area while defending a free-kick, and Ronaldo placed the resulting set-piece high to Buffon's right.

Five minutes later Andrea Pirlo wasted a chance to equalise for a second time, blazing over from a tight angle following a scramble in the box.

Ronaldo then fired narrowly wide having being fed by Benzema four minutes before the break as the contest continued at a furious pace.

Two minutes after the interval, the visitors were dealt a cruel blow when Chiellini was shown a straight red card for what the referee deemed to be an elbow on Ronaldo, although replays suggested the decision was harsh.

Benzema should have put Madrid further ahead on the hour, somehow turning the ball over from point-blank range after being picked out by Alvaro Arbeloa.

Sami Khedira was next to threaten in the 72nd minute, sending a tame chip into the arms of Buffon when clear on goal but it mattered not as Madrid made it three wins from as many matches this season.