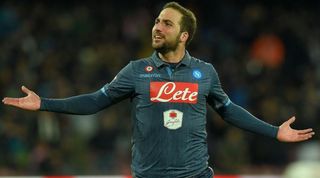 The Serie A side are in control of the tie following a 3-1 first leg triumph on home soil, coming from behind thanks to a Gonzalo Higuain hat-trick in a game that saw Dynamo finish with 10 men after Roman Zobnin was sent off.

But coach Rafael Benitez was angered by his side's 2-0 defeat at Verona last Sunday, which made it just one win in five league games for Napoli.

That run has seen Napoli drop out of the top three and led Benitez to raise doubts over their capability to cope with the demands of playing in the Coppa Italia, Europa League and Serie A.

"We had the wrong approach from the start. We began badly, we conceded a goal and in the second half we continued to make mistakes and paid the price. I certainly expected a different game.

"Last season this team set a record of 10 away wins, so I expected the same this season. We need to try to find some continuity.

"Perhaps we are lacking maturity to battle on three fronts. We will need to work harder in order to improve in our next games."

Despite their disappointing performance in Verona, Napoli should head to the Arena Khimki with confidence given the relatively healthy advantage they hold.

However, the visitors will still need to be wary of a Dynamo side who have not lost at home in any competition since October and have the bonus of an away goal.

The hosts approach the contest having lost to 1-0 to city rivals Spartak Moscow at the weekend, a result that dented their hopes of finishing in the top two of the Russian Premier League.

But, in addition to being without the services of the suspended Zobnin, midfielder Igor Denisov (leg) will also be unavailable for Dynamo.

Zuniga came off the bench in last week's first leg and has been named in the squad again as Benitez seeks to continue his quest to win the competition with a third different team.