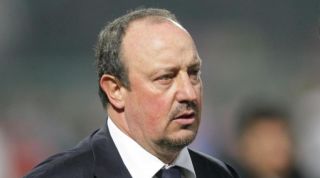 Benitez's men progressed to the last 16 of Europe's secondary club competition with a 5-0 aggregate win over Trabzonspor.

With a second leg of the Coppa Italia semi-final with Lazio on the horizon, Napoli are in contention for two trophies and, despite dropping out of Serie A's top three last weekend, are contenders to qualify for the UEFA Champions League.

Yet for all their relative success this season, former Liverpool, Inter and Chelsea boss Benitez does not appear to be fully committed to Napoli.

The Spaniard has been linked with a potential switch to Paris Saint-Germain and, in a recent interview with France Football, refused to deny that a change of scenery is a possibility.

"I'm in Naples and I'm concentrated on Napoli," Benitez said.

"But in the future I can't predict what will happen. In the past I've coached in Spain, England and Italy.

"I'd have no problem embracing a new adventure in a new league. There'd have to be the right offer, at the right time, with the right team."

The home fans at the Stadio San Paolo will hope the words of Benitez - who said after Sunday's 2-2 draw with Inter that he would probably decide his future in April - do not unsettle a team that has looked shaky in recent weeks.

Napoli threw away a two-goal lead in the stalemate with Inter, which came on the back of a 1-0 loss to Torino and a 1-1 draw with Lazio, who leapfrogged them into third place at the weekend.

And they cannot afford to suffer the same lapses in concentration versus a Dynamo side in excellent form. Dynamo are yet to taste defeat in the Europa League and have not lost in any competition since November 2.

Dynamo will be without attacking midfielder Artur Yusupov due to suspension, but Napoli will still need to be wary of a forward line with plenty of talent.

Both striker Kevin Kuranyi and midfielder Aleksey Ionov have netted four goals in the Europa League this season for Stanislav Cherchesov's men.

And, with Napoli looking vulnerable at the back, Dynamo have a great opportunity to put themselves in a position to progress and keep their hopes of a first European trophy intact.