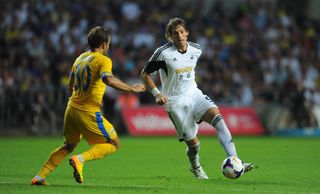 Hamza Younes proved to be the matchwinner for the hosts on Thursday, the Tunisian netting late in the second half after Roland Lamah had cancelled out Njongo Priso's opener.

Leading 5-1 from the first leg, Swansea made five changes to the team that lost 1-0 to Tottenham in the Premier League last Sunday, as boss Michael Laudrup rested several key players ahead of their upcoming clash with West Brom.

It took 18 minutes for Laudrup's men to craft their first real opening of the game, forward Rory Donnelly firing wide after he was put through brilliantly by Michu.

Clear-cut opportunities proved few and far between in the opening period, with the hosts having to resort to the spectacular in their attempt to get back into the tie. Younes sent an acrobatic overhead kick inches over the bar just after the half-hour mark.

Petrolul, somewhat predictably given the deficit they faced, continued to force the issue, but struggled to find a way through an organised Swansea defence and midfielder Ovidiu Hoban wasted one of their better chances when he headed well wide from a corner.

The home side’s best opportunity came just two minutes before the break, as Younes' close-range effort was cleared off the line by Leon Britton - who was later sent off - after Gerhard Tremmel could only get a hand to the shot.

Swansea held out until the break and, although the Romanian outfit continued to force the issue in the early stages of the second half, it was the Premier League team who should have taken the lead.

Donnelly broke down the right only to see his cross-cum-shot strike the inside of the post.

Laudrup's side's quality began to tell in the second half as they took charge of a frenetic contest, but they continued to be wasteful in front of goal as Pablo Hernandez shot tamely into the hands of Mircea Bornescu from point-blank range.

Swansea were in control for much of the second period, but the goal that would cap a professional display continued to elude them. Donnelly eventually did have the ball in the back of the net, only to see his effort ruled out for handball.

Petrolul remained a threat despite Swansea's dominance, and they capitalised on some poor defending from the hosts to take the lead. Winger Priso broke through after being played onside by Chico Flores and coolly steered the ball past Tremmel.

However, the hosts' advantage lasted less than a minute, as Swansea substitute Lamah turned home Alejandro Pozuelo's free-kick at the far post to level things up.

Swansea's progress had been long since secured, but defeat on the night was confirmed when Younes headed home at the near post from Guilherme's left-wing cross before Britton was dismissed for a second bookable offence.