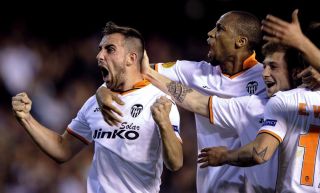 Valencia produced an astonishing comeback to qualify for the last four, overturning a 3-0 first-leg deficit against Basel with an outstanding 5-0 triumph, after extra time, in the return game at the Mestalla.

And their reward is a meeting with familiar face Emery, who left the club in 2012 after guiding them to third-place finishes in three of his four seasons in charge.

Juan Antonio Pizzi's men have taken four points from Sevilla in La Liga this term, but will be wary of a club that has considerable pedigree in Europe's second-tier competition, winning it in 2006 and 2007.

Paco Alcacer was the star of Valencia's remarkable recovery in the quarter-finals, netting a superb hat-trick to keep their hopes of winning the tournament very much intact.

And the 20-year-old striker is keen to build on that showing and help Valencia recapture the trophy they won for the first time back in 2004.

"That is what we are aspiring to and we are putting a lot of hope into this competition because it is good for the players and for the fans," Alcacer told UEFA.com.

"If we do not get through it will be because things have not worked out, not because we have not given everything.

"Once you get here you have to do everything possible to get further.

"We just need to play the game as if it is our last and get as much as possible out of the away leg so that we can be a bit more relaxed when we play at home."

But Sevilla - who sit fifth in the Spanish top flight - are sure to provide a stern test for Valencia after hammering two-time winners Porto 4-1 in the second leg of the quarter-finals, securing a 4-2 aggregate success.

Valencia are three places below in eighth, but Emery believes the two sides are well matched.

"Ours are two very even teams in every sense," Emery said. "It would be a mistake to think we're the favourites to go through because of the current Liga standings.

"Valencia are a great team and our sole objective now is focusing on (Thursday's first leg) against them."

Sevilla will be without defender Coke through suspension, while Alberto Moreno could again join Sebastian Cristoforo (knee) and Denis Cheryshev (toe) on the sidelines after missing the 4-0 win over Granada with an ankle issue.

Javi Fuego and Antonio Barragan should both return for Valencia after serving domestic bans, however, Philippe Senderos (thigh) is a doubt, while Diego Alves and Victor Ruiz remain out.