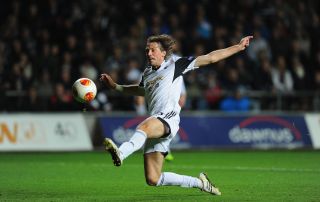 Swansea looked set for their third Group A win as many matches after Michu capped an excellent team move with a clever finish in the 68th minute.

But in an otherwise unremarkable match at the Liberty Stadium, Swansea goalkeeper Gerhard Tremmel came off his line to foul substitute Ibrahima Balde in stoppage time.

And Cisse stepped up to dispatch the spot-kick with aplomb as Swansea conceded their first goal of the group stages.

Swansea made six changes from the team that thrashed Sunderland 4-0 on Saturday, with Tremmel and midfielder Jonjo Shelvey coming in, while Kuban manager Viktor Goncharenko recalled striker Cisse in one of his four alterations.

Goncharenko – taking charge of just his second match since replacing sacked Romanian Dorinel Munteanu – would have been pleased with his side's start but they struggled to create clear-cut opportunities.

And after Nathan Dyer forced Kuban goalkeeper Aleksandr Belenov into a smart save with a testing left-footed effort, Shelvey nearly gave Swansea the lead in the 21st minute.

He combined well with Wilfried Bony and Michu before producing a good first touch, but shot wide from inside the penalty area, before Kuban enjoyed a terrific five-minute spell.

First Arsen Khubulov was released down the right, but saw his teasing cross – that had Cisse waiting to pounce – somehow turned over the bar by a desperate Chico Flores, before Maksim Zhavnerchik's 25-yard effort was pushed wide by Tremmel.

Shelvey fashioned another good chance for himself, after lifting the ball over Kuban defender Igor Armas, but he again shot wide, before Dwight Tiendalli was lucky to stay on the pitch.

The Swansea defender brought down Lorenzo Melgarejo when he looked to be through on goal, but referee Kristinn Jakobsson only produced a yellow card.

Cisse and Ivelin Popov had half-chances for Kuban shortly after the break before in an attempt to change the match, Swansea City boss Michael Laudrup introduced Spanish pair Alvaro Vazquez and Angel Rangel.

It was another Spaniard who gave Swansea the lead, however, as a patient passing move saw Michu break the deadlock.

The striker was involved in the build-up, receiving the ball from Shelvey before playing in Alejandro Pozuelo, and his clipped pass over the top exposed the Kuban defence, with Michu first to the ball as he stabbed past the on-rushing Belenov.

The goal was Michu's fourth of Swansea's UEFA Europa League campaign and they sat back in the latter stages, happy to protect their lead.

They failed to complete the job though, with Cisse's last-minute spot-kick giving Kuban their first point of the group stages.