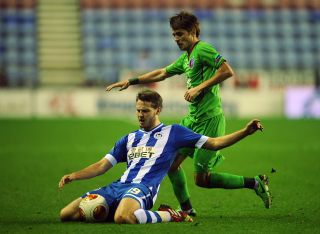 The Manchester United loanee, who scored twice in the 3-1 win over Maribor, earned the hosts a share of the spoils after they had fallen behind to Aleksandr Prudnikov's 15th-minute opener.

It was his fourth goal in as many matches at the DW Stadium and it took the Championship club one step closer to qualifying for the round of 32, with five points from three matches.

Kazan had won their opening two matches but could not build on their early lead as the Group D leaders had to settle for a point.

Wigan manager Owen Coyle opted to make five changes from the team that lost 1-0 to Blackpool at the weekend, with Jean Beausejour and Grant Holt among those drafted in.

There were also four changes for Rubin boss Kurban Berdyev from the 2-1 loss to Volga, with the 61-year-old freshening things up by adding striker Prudnikov and midfield duo Syarhey Kislyak and Roman Eremenko into the fold.

It was the home side that had the better chances of the opening spell, with Powell coming close to putting them ahead in the ninth minute with a fine volley that was blocked by Chris Mavinga, before Sergey Ryzhikov kept out the rebound.

They were made to rue the missed opportunity just five minutes later as Prudnikov fired home after some impressive link-up play from the visitors, with Mavinga picking him out well on the edge of the box.

Having conceded against the run of play, Wigan spurned a glorious opportunity to level the contest in the 25th minute as, following some skillful work from Ben Watson on the wing, Jordi Gomez fired over the crossbar when well placed.

Powell demonstrated greater composure when he got the ball on edge of the box in the 40th minute, though, with the 19-year-old placing his shot into the bottom corner to leave Ryzhikov with no chance.

The half-time break did not seem to do either team any favours as the game became increasingly drawn out, with the best opportunity of the early stages seeing Roman Eremenko drive a free-kick into the Wigan wall.

Emerson Boyce took a tumble in the box a few minutes later but saw his ambitious appeals for a penalty waved away.

The hosts did eventually get another great chance to take the lead in the dying minutes, with a fine cross from Callum McManaman finding Marc-Antoine Fortune, who saw his effort superbly saved by Ryzhikov.

Wigan will now hope to continue their campaign with another good result when they face the Russian team on away turf on November 7.