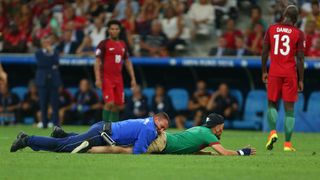 UEFA has opened disciplinary proceedings against Portugal and Poland in the wake of Thursday's Euro 2016 quarter-final at the Stade Velodrome in Marseille.

Portugal booked their ticket for the semi-finals following a hard-fought win after spot-kicks, but the match was marred by a number of incidents.

A Portugal fan invaded the pitch in extra-time, the Poland faithful had to be contained by police and both sets of supporters also set off fireworks.

The Polish Football Federation (PZPN) has been charged with "setting off of fireworks", "crowd disturbances" and "late kick-off" following their unfortunate defeat after penalties.

The Portuguese Football Federation (PFP), meanwhile, has been charged with "field invasions by supporters" and "setting off of fireworks".

The PFP previously escaped punishment for a pitch invasion during their group-stage draw against Austria.

These cases will be dealt with by the UEFA Control, Ethics and Disciplinary Body on July, 21.