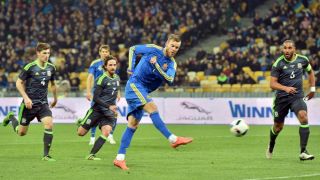 An Andriy Yarmolenko strike against the run of play proved enough for Ukraine to register a 1-0 friendly victory over Wales on Monday.

Both nations were playing their last match before their respective coaches name their final squads for Euro 2016.

And, while Chris Coleman will have been satisfied with his side's dominance of possession for the most part, the sloppy defending that led to the hosts' goal will be a worry.

Despite the fact Wales' defensive line was arguably at full strength, Yarmolenko was allowed the time and space to move into the penalty area unmarked and beat Wayne Hennessey at his near post after getting on the end of a Ruslan Rotan free-kick.

The term 'friendly' seemed almost lost on Ukraine has they showed no mercy in their attempts to win back possession, and Coleman will be relieved to leave Kiev with a fully fit squad.

Wales - without star duo Gareth Bale and Aaron Ramsey - rung the changes in a stop-start second half, as Mykhaylo Fomenko's men clung on to their narrow advantage.

The return to fitness of Ben Davies and Neil Taylor allowed Coleman to revert to a more familiar 3-5-2 formation, and Simon Church was rewarded for his equaliser in the 1-1 draw against Northern Ireland on Thursday with a start in place of the benched Sam Vokes.

Jonny Williams and Emyr Huws were also given a chance from the start in a match Coleman described as "not do or die" for his fringe players' hopes of reaching the tournament, and Wales looked comfortable on the ball early on.

Tom Lawrence forced goalkeeper Andriy Pyatov to tip over his crossbar with the first real opportunity of the match after 13 minutes, while Ukraine - sporting three changes from a 1-0 win over Cyprus last week - offered little in attack and caused more alarm with the full-blooded nature of their tackling.

Denys Garmash’s challenge on Huws proved the final straw for the referee, who brandished the yellow card for the first time after 22 minutes, before Roman Zozulya tangled with Wales captain Ashley Williams.

But after the visitors survived one momentary scare in their own box, Yarmolenko broke the deadlock by strolling into space unmarked and turning in a chipped free-kick.

The tackles continued to fly in from Ukraine after the break, with Artem Fedetskiy the third home player booked when he lunged at Taylor five minutes into the second half.

The impressive Joe Allen's long-range strike was unconvincingly punched clear by Pyatov soon after, while Olexandr Kucher headed wide from a set-piece at the other end.

Walsall's Tom Bradshaw came off the bench to make his debut 17 minutes from time and forced Pyatov into a save from a header late on, but Wales were unable to salvage a draw.