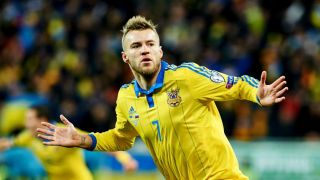 Andriy Yarmolenko and Yevhen Seleznyov were both on target as Ukraine edged closer to Euro 2016 with a 2-0 win in their qualifying play-off first leg with Slovenia.

Yarmolenko notched his fifth goal of the campaign after 23 minutes to give the hosts a deserved lead at the break, before Seleznyov added a second from close range after the restart.

Ukraine controlled large parts of the clash in Lviv and could have won by a greater margin had Samir Handanovic not been in fine form for the visitors, while Seleznyov almost made it three when he struck the post 20 minutes from time.

Inter goalkeeper Handanovic denied Serhiy Rybalka in the opening 45 minutes, and was on hand again in the second half to push Denys Garmash's header away.

Slovenia struggled to create many chances and when they did their finishing lacked quality, Josip Ilicic guilty of wasting their best opening in the first half.

Victory gives Ukraine a cushion heading into the second leg on Tuesday, Slovenia needing a significant turnaround if they are to make it to France next year.

After an impeccably observed period of silence following the terror attacks in Paris on Friday, it was the hosts who started the brighter.

Roared on by the vociferous home support, Vyacheslav Shevchuk was given room to cross from the left after two minutes, but the stretching Seleznyov was unable to convert at the back post.

Chances were few and far between until midway through the first half when Slovenia twice failed to deal with deliveries from the left.

A poor punch from Handanovic landed at the feet of Yarmolenko, who dropped a shoulder to evade three defenders before firing the ball into the bottom-left corner.

Ilicic should have brought Slovenia level four minutes later following a superbly weighted knock down from Milivoje Novakovic, but he blazed over from an unmarked position.

Having been given a let-off, Ukraine pushed for a second before the break and twice threatened through Rybalka, the midfielder seeing one long-range effort saved by Handanovic before another was deflected narrowly wide.

Ukraine's second did come early in the second half, though, as Yarmolenko combined with Artem Fedetskiy on the right to enable Seleznyov to score.

Fedetskiy rolled a low pass across the Slovenia six-yard box for the striker to pounce, Seleznyov sliding in at the back post to double their advantage.

There was little Handanovic could do about the second goal, but he ensured they did not fall further behind just before the hour with a reflex save to deny a diving header from Garmash.

Seleznyov was able to beat the Slovenia keeper again before the final whistle, but his low effort thudded against the post as Ukraine were left to settle for a two-goal advantage ahead of Tuesday's return leg.