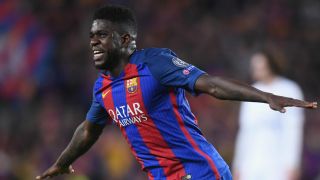 Samuel Umtiti is hoping to get one over his Barcelona team-mates when France take on Spain in a match he feels is "more than a friendly".

The high-profile international between two teams ranked in the world's top 10 takes place at Stade de France on Tuesday.

France defender Umtiti could come up against as many as four of his Barca colleagues in the match and he has spoken to some of them in the build-up to a game he insists Les Bleus are taking seriously.

"Playing against one of the biggest football nations is more than a friendly game for sure," Umtiti told reporters.

"I talked to some of them [Barcelona team-mates] before I came here. We must play as we know how to and try to win this game.

"We will have to remain serious and apply ourselves. Spain have been one of the best teams for several years.

"We know their quality of play and we will prepare for it like we have for all the games we have played lately."

One of the Barca players who could face Umtiti is his central defensive partner at Camp Nou, Gerard Pique, who he praised as a positive influence.

Umtiti said: "From the first game I have focused on the things that he does and how he does them.

"I spoke a lot with Pique on and off the pitch. From when I arrived at Barcelona he has been an example for me.

"At Barcelona defend and attack in a different way, I note that I have progressed in understanding the style.

"When you work day to day with great players, your performance improves too as a necessity."