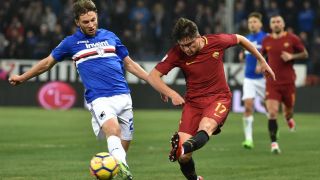 Turkey youngster Cengiz Under is coming on "leaps and bounds" according to Roma head coach Eusebio Di Francesco.

Under joined Roma last year in a €13.4million deal from Basaksehir, despite interest from Manchester City, and the 20-year-old forward was initially used sparingly by Di Francesco.

However, he started the back-to-back encounters with Sampdoria last week and, with his boss impressed, Under may well retain his spot for the trip to Verona.

"Cengiz has come on in leaps and bounds recently, but his development isn't done yet," Di Francesco said.

"He needs stability, he needs to play with continuity but that isn't easy – he understands Italian but he still does not speak the language well.

"I must say that against Sampdoria he was unlucky, at times luck can change a player's path.

"Before I saw him as a player better suited to coming on and trying to change a game, but now I feel comfortable using him from the first minute. Tomorrow [Sunday] he could start the game."

GALLERY |  | Photos from today’s final preparations for the trip to Verona February 3, 2018

The bigger picture is not so encouraging for Roma, with last Sunday's 1-0 defeat at home to Samp making it seven matches without victory in all competitions.

They lie three points shy of Inter in the final Champions League qualification place and Di Francesco expects few favours from a Verona side mired in relegation strife.

"Verona are a side that have changed a lot in January, in both attack and defence," he explained.

"I believe they are a side that have got better and will be back to their former levels. It will be a different game compared to the first meeting."

An Edin Dzeko brace helped Roma to a 3-0 win over Verona at the Stadio Olimpico back in September.