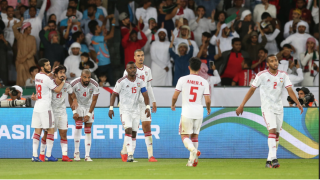 United Arab Emirates coach Alberto Zaccheroni is focused on clinching top spot in Group A as the Asian Cup hosts aim to book a place in the last 16 when they face Thailand.

Having drawn against Bahrain before beating India, Zaccheroni's side need just one point from their final group game to secure progression to the knockout stages.

UAE sit in pole position at the moment, a point ahead of both Thailand and India, who face Bahrain in Group A's other game on Monday.

And Zaccheroni believes UAE's performance in their 2-0 win over India last time out indicated that the tournament hosts are growing as a side.

"First of all, we are so happy that we won the last match and nearly qualified the UAE team to the last 16," Zaccheroni told a news conference in Al Ain on Sunday.

"But our focus will be high on achieving the top spot and qualifying without looking or considering the result of the other match.

"The development of our performance is slow, but our ambition is to play well and show our best performance. Our progress is gradual.

"After this stage we will play against stronger teams in a knockout stage, but, for me, the players are fully ready.

"In terms of performance, the team is progressing. And I hope the performance will progress further and in the coming match you'll see something else."

Thailand sacked coach Milovan Rajevac following a 4-1 defeat to India in their opening fixture, and interim boss Sirisak Yodyardthai oversaw a 1-0 win over Bahrain in his first match in charge.

Zaccheroni added: "We are playing against a very developed national team with a different style of play, who is competing to win qualification to the last 16.

"For me, the match won't be easy. We need to perform at our best level, better than our previous matches."

Ali Mabkhout has been preferred to Ahmed Khalil up top for UAE, and he wrapped up the win against India with an 88th-minute effort to open his account for this Asian Cup campaign. The Al Jazira forward has been in fine form for his club this term, netting 15 goals from 12 appearances.

Having scored eight goals in 2018 for J-League side Consadole Sapporo, winger Chanathip Songkrasin brought that form to the fore against Bahrain will offer Thailand a real threat.

- This will be the first encounter between UAE and Thailand at the Asian Cup.
- UAE have gone three games without defeat in the Asian Cup (W2 D1), their longest unbeaten streak in the competition (excluding penalty shoot-outs) since a run of seven games between the 1992 third-place play-off and the 1996 final (W4 D3).
- Thailand will be facing the Asian Cup hosts for just the second time in their history after drawing 1-1 against Lebanon in the 2000 edition.
- UAE ended a run of nine games in the Asian Cup without a clean sheet, beating India 2-0 on matchday two – they will be aiming to secure back-to-back clean sheets in the competition for the first time since 1996 (run of four consecutive shut outs).
- Thailand are looking to win successive games in the Asian Cup for the first time in their history following their 1-0 victory against Bahrain last time out, with their only other win coming against Oman in the 2007 edition.