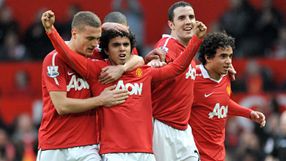 Manager Sir Alex Ferguson had ruled him out of Tuesday's last-16 second leg as the Portuguese recovers from a gashed leg but seemed to change his mind before the French champions head to Old Trafford following last month's 0-0 draw in Marseille.

"Nani has had the stitches removed and has a chance for Tuesday," Ferguson was quoted as saying by the Manchester Evening News on Sunday. "He's done some work on the bike, but the problem is that he hasn't trained yet."

Marseille only needed to have looked at United's team sheet for Saturday's FA Cup Quarter-Final against Arsenal to witness Ferguson's ability to shock, as he named a lineup with only one recognised midfielder which still beat the Londoners 2-0.

Grappling with a raft of injuries, and wanting to rest the likes of Darren Fletcher, Michael Carrick, Ryan Giggs and Paul Scholes, Ferguson drafted in full backs Rafael, Fabio and John O'Shea who performed well in midfield.

"I couldn't risk Scholes and Giggs because of Tuesday's game against Marseille, such a vital game for the club, so Darron Gibson had to play as the only natural midfielder," Ferguson told MUTV.

United were boosted by winger Antonio Valencia coming through 45 minutes on Saturday, his first appearance since breaking and dislocating his ankle in September.

He looked sharp enough to be a viable replacement for Nani if the Portuguese sits out the game as had been expected following last Sunday's injury.

The English side have the upper hand at Old Trafford where they are undefeated this season and where they have never lost to French opposition, although a score draw would put the visitors through.

Marseille could benefit from insider knowledge as their Argentine defender Gabriel Heinze knows Old Trafford well from his three years at United from 2004 and he was looking forward to returning to the site of so many good memories.

"My first big moment at Old Trafford was when the fans and my team voted me as best player," he told UEFA's website. "To go on to win the domestic league title with Manchester United - my first - was unforgettable."

Premier League leaders United will be bracing themselves for an onslaught from a Marseille side who go into the game lifted by a 2-0 win over Stade Rennes in Ligue 1 at the weekend.

Playmaker Lucho Gonzalez, who netted the second goal against Rennes, was at his brilliant best and France forward Loic Remy opened the scoring.

They will be without Brazilian striker Brandao, who went back to his native country for a week after being put under formal investigation i