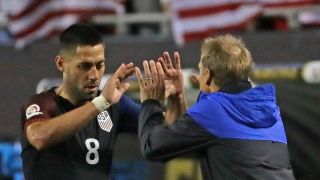 United States coach Jurgen Klinsmann believes his side possess the necessary depth to make it as far as possible in the Copa America Centenario ahead of their quarter-final with Ecuador.

The hosts – playing in the tournament for the fourth time – finished top of Group A after wins over Costa Rica and Paraguay.

Their previous best result at a Copa America was a fourth-place finish in the 1995 edition held in Uruguay, but Klinsmann and Co. believe they have as good a chance as any to be crowned champions in 2016.

While DeAndre Yedlin will miss out due to his dismissal in the 1-0 victory over Paraguay, Klinsmann insists USA have the depth to cover for any potential changes from now on.

"It's a bummer not to have him in the line-up. Sooner or later you lose a player through an injury or second yellow card," the German said ahead of the quarter-final clash in Seattle.

"But everyone on the bench is ready to step in. This is a good feeling we have.

"When somebody goes down or we need to make a substitution or a tactical substitution, the next one is getting the job done. This is what a team is about."

USA and Ecuador faced each other in a warm-up friendly before the competition, in which the former came out 1-0 winners.

But Klinsmann knows that will mean nothing in their last-eight clash, especially considering Ecuador were without the likes of Antonio Valencia and Walter Ayovi.

"You have a good sense for them [from the friendly]. But this is a 50-50 game, it's a knockout game. It's do or die. A couple of special players were missing then," he said.

"It's the moment for a player to shine, to find their own standing in the world of soccer."

Ecuador will feel confident of making the semi-finals for the first time since 1993, after avoiding defeat against Brazil, Peru and Haiti in Group B.

Miller Bolanos remains a doubt for the South Americans after picking up a muscular injury, but they will be boosted by Jaime Ayovi's return to training and the availability of Gabriel Achilier, who has served his one-game suspension.

Ecuador coach Gustavo Quinteros says they are ready for the challenge, but know the hosts will not be easy to beat.

"Unites States is a strong and fast team, and they have great forwards," he said.

"They try to play good football, and they will be a very difficult rival. But we are ready."