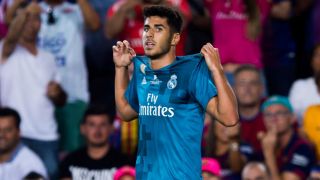 Cristiano Ronaldo may have helped Real Madrid seize control of the Supercopa de Espana, but he's left them facing a sizeable quandary.

The 32-year-old produced one of the most eventful substitute appearances El Clasico has ever seen on Sunday, scoring a stunning second goal for his side, earning yellow cards for removing his shirt and diving and then pushing the referee, all in the space of a little over two minutes.

Ronaldo's loss of temper has earned him a five-game ban from the Royal Spanish Football Federation, which means that, barring a successful appeal, he will not play again for Madrid in domestic competition until the LaLiga match with Real Betis on September 19.

Losing your club's record goalscorer is a daunting prospect for any head coach, but Zinedine Zidane demonstrated just how well his Madrid can perform without Ronaldo during the forward's rest days last season.

However, with his attacking options lighter than last term and with the transfer window still open, what should Zidane do to ensure Ronaldo's absence does not strike a major blow to their title defence? We assess five possible choices for the Frenchman...

With Ronaldo having scored a wondergoal, stripped off and been sent off in a frantic couple of minutes, it's easy to forget that Marco Asensio put the tie firmly in Madrid's control with a spectacular strike of his own.

It was another special moment for the 21-year-old, who boasts the remarkable distinction of having scored on his Madrid debuts in the Supercopa, the Copa del Rey, the UEFA Super Cup, the Champions League and LaLiga.

Asensio regularly claimed the spot on the left-hand side of the attack when Ronaldo was rested last year and helped Madrid to some of their most convincing wins of the campaign, including the 6-2 thrashing of Deportivo La Coruna, the 3-0 win at Real Sociedad and the 4-0 cruise at Granada.

Consistent starts have been hard to come by for the former Real Mallorca youngster but he has undoubtedly earned his chance at a sustained run in the team. His performances this year suggest he would not let Zidane down.

TAKE THE PLUNGE IN THE TRANSFER MARKET

It's been a strangely prudent transfer window from Madrid so far, with young talent like Dani Ceballos and Theo Hernandez brought in as fringe players including Alvaro Morata, Danilo and James Rodriguez have been moved on for healthy sums or on convenient loans.

Of course, the rumour mill hasn't exactly been quiet. Talk of a €180million deal for Kylian Mbappe to celebrate Florentino Perez's re-election as president has simmered for some time, while Borussia Dortmund's Ousmane Dembele has also been heavily linked.

While Madrid still have the strength in depth to cope without Ronaldo, an injury or suspension to Gareth Bale or Karim Benzema would suddenly leave them looking light on options. As such, now could be the ideal time to sign an attacking star who could shoulder the goalscoring burden for the short term and, perhaps, replace Ronaldo as Bernabeu kingpin in the coming seasons.

BUILD THE TEAM AROUND BALE (FINALLY)

Ever since his €100m move from Tottenham in 2013, Gareth Bale has played second fiddle to Ronaldo, especially in the eyes of the supporters.

The 28-year-old has enjoyed tremendous success when it comes to trophies but he has suffered more than most when it comes to injury problems and the tactical whim of the coaches when they have tinkered with the attacking system.

However, Ronaldo's absence from pre-season and his restriction to brief cameos in the UEFA Super Cup and Supercopa meetings with Manchester United and Barcelona have given Bale the chance he craves: playing in a more liberated central role alongside Benzema, he has been granted the kind of licence to impress that he has had with Wales for some time.

He failed to score against United or Barca but it is surely a matter of time until he opens his account for the season. With the confidence of having the team built around him, he could enjoy his most productive start to a season yet.

TURN TO THE CASTILLA

One surprising feature of Zidane's squads for the United and Barcelona matches was the absence of Borja Mayoral, named MVP in the pre-season clash with the MLS All-Stars.

The 20-year-old is considered one of the brightest talents to emerge through the Madrid ranks for some time, and his return from a loan with Wolfsburg, coupled with Alvaro Morata's move to Chelsea, has opened the door to a first-team spot.

Ronaldo's ban represents the perfect opportunity for the striker, who can operate in a wide role but is more suited to a central position and would work well alongside or in place of Benzema in the team.

Mayoral is not the only option from the youth ranks, either. Oscar Rodriguez, captain of Guti's Juvenil A side, signed a new contract in June and was involved in the pre-season tour of the United States, and the 19-year-old is primed to break into the first team.

TRUST IN ISCO AND THE DIAMOND SYSTEM

Using a 4-4-2 diamond with Ronaldo in the team was effective last season – just look at the 3-0 win over Atletico Madrid – but the beauty of the system is that it allows Madrid to cope well without their talismanic forward.

At the heart of the formation's success has been the resurgence of Isco. Once considered likely to leave after a couple of frustrating years in the capital, the 25-year-old is fast becoming irreplaceable for Zidane and is reportedly set to sign a new contract that contains a €700m release clause.

Isco's creativity behind the movement of a front two has proved devastating, not least in the Super Cup win over United, in which he scored his side's second goal. His performances this year could give Zidane enough confidence to ignore any thoughts of a panic buy or hasty reshuffle over the next five matches, and instead keep faith with the man they call 'magic'.