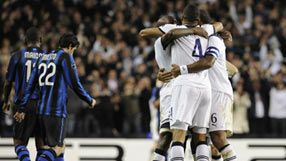 He demonstrated as much having avoided an FA rap following his rant about referee Mark Clattenburg earlier this week, and he did so again on Tuesday night, unleashing an attacking team that, as he put it: "know only one way to play."

A team without first choice defenders Ledley King and Michael Dawson, but boosted with the addition of attacking playmaker Rafael van der Vaart, who was suspended a fortnight ago for the 4-3 defeat at San Siro.

A team, he says, who have been created to play football the way he likes to see it. With style and imagination, flair and finesse.

It was a bold move, given what happened to weeks ago. Inter swept Spurs aside at the San Siro, blasting four past them in just 14 minutes, before Gareth Bale’s superb hat-trick handed the visitors a respectable 4-3 defeat.

But, for all his issues and distractions with the Nani goal at Old Trafford, Redknapp made all the right decisions. The 63-year-old absorbed and learned from the previous mistakes.

In Tom Huddlestone, he had the perfect answer to Wesley Sneijder, and an extra emphasis had clearly been placed on keeping Samuel Eto’o at bay.

And in Bale, Redknapp had the key. The 21-year-old was simply magnificent once again, giving Inter right-back Maicon an "absolute roasting," as co-commentator Andy Gray rightfully put it.

Spurs came out ready to fight, with memories of that chastising first 14 minutes still fresh in their minds and the crowd of White Hart Lane behind them.

In fact, they outplayed the European champions. And after just 18 minutes, Redknapp’s attack-minded set up paid off.

Following a great passing move, Luka Modric added a touch of genius, skipping past two tackles before putting Van der Vaart through on goal. The Dutchman was never in any doubt and smashed home emphatically at the near post.

Carlo Cudicini, who came in for the suspended Heurelho Gomes, provided an extra sense of security in goal for Spurs. His crucial diving save from a Sneijder free-kick at the end of the first half proved testament to that.

Redknapp’s choice to then replace the injured Van der Vaart with Jermaine Jenas instead of defensive-midfielder Wilson Palacios at half-time was another bold decision.

But once again, he was proved right as Spurs got their second. And, once again, Bale was at the heart of it.

On 59 minutes, the Welsh dragon ghosted past Inter substitute Nwankwo Obiora like he wasn’t there before picking out the perfect cross for Peter Crouch, who had the easy task of taping the ball into an empty net.

However, as always with Tottenham in the Champions League this season, nothing comes easy. After 79 minutes, Eto’o was allowed to cut inside on the left and curl the ball past Cudicini’s outstretched fingers. A nail-biting finish?

No. 10 minutes later, Bale finished the game off. Once again bursting down the left, once again putting the ball on the plate for Crouch’s replacement Roman Pavlyuchenko, who tapped in and sent Spurs fans into raptures.

Glory, glory Tottenham Hotspur plays over the loud speakers and on this performance, it’s hard to beat that description.

One thing’s for sure, the two games between Tottenham and Inter Milan will be