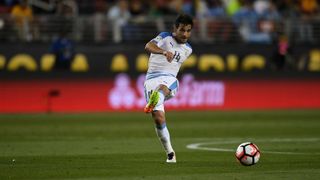 Seattle Sounders have completed the signing of Uruguay international Nicolas Lodeiro from Boca Juniors for an undisclosed fee.

Lodeiro, 27, joined Boca in 2015 and played a key role in the Argentine giants' run to the Copa Libertadores semi-finals this season.

The former Ajax and Corinthians midfielder's initial contract with Seattle runs until 2019, though the MLS side hold the option for additional years.

"We have doggedly pursued our top target, Nicolas Lodeiro, for the past several months and we are delighted our persistence finally paid off with his signing," said Lagerwey.

"We were willing to wait for Nico because we believe in his character off the field as well as his abilities on it.

"Wherever he has played he has made his team better. We believe he can be a big piece of where we want to take the Sounders long term.

"For a player who has played in three Copa Americas, winning once, played in two World Cups and played in four Copa Libertadores', twice reaching the semi-final, to join us in the prime of his career reflects the growing stature of not only Seattle, but MLS as a whole."

Seattle, who parted company with coach Sigi Schmid on Tuesday, currently sit ninth in the Western Conference and will be hoping the Uruguayan can help them avoid missing out on the playoffs for the first time in eight years.