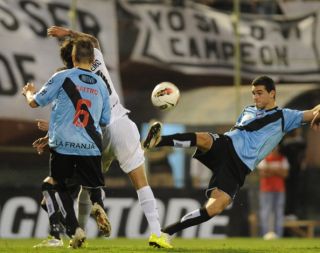 Leonardo Ramos' men scored twice in the final 10 minutes to claim their fourth win in five matches, edging a point clear at the top.

Jorge Rodriguez's 49th-minute goal had given Penarol the lead, but his sending off soon after put them on the back foot.

Danubio made the most of their numerical advantage as Fabricio Formiliano equalised in the 80th minute.

And, just four minutes later, Hugo Sequeira scored what proved to be the winner for Danubio as they climbed top of the league.

River Plate were beaten in the league for the first time this season as Ignacio Gonzalez's 10th-minute goal gave Nacional a 1-0 win.

El Tanque Sisley remain unbeaten but drew for the second straight time as they were held to a 0-0 draw at Liverpool.

Struggling Miramar Misiones remain without a win after being beaten 1-0 by Defensor Sporting.