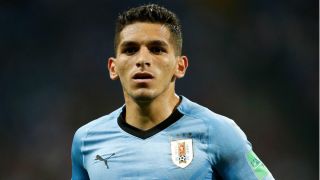 Lucas Torreira will be prepared for life in the Premier League when his "scary" transfer to Arsenal is completed, according to the player's father.

Arsenal look set to sign Torreira, who has started in Uruguay's last two World Cup games, from Sampdoria once the midfielder's campaign in Russia is over.

The 22-year-old would become Unai Emery's fourth signing of the transfer window.

There are doubts over Torreira's ability to adapt to a more physical league than Serie A, but his father Ricardo claims his son has a programme ready to help him settle in England.

"There will be people that will accompany him," he told Teledoce.

"He won't be alone. It's a big change [going to England] and we don't want to think about it yet because we're scared.

"The truth is it's tough to manage the language, adapt to the [London] society and customs and at the same time not lose ours.

"But there's a whole programme getting readied for Lucas."