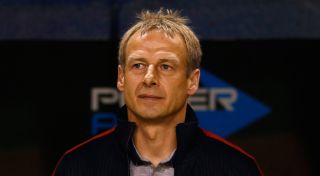 Panama looked set to clinch a spot in a two-legged intercontinental play-off against New Zealand on Tuesday when they led the USA 2-1 with seven minutes remaining, while Costa Rica were ahead by the same margin over Mexico.

But stoppage-time goals from Graham Zusi and Aron Johannsson saw the USA claim a 3-2 victory in Panama City, which sent Mexico into the play-off against New Zealand and dumped the hosts from qualification.

While Klinsmann was never going to apologise for his team chasing victory, even though the result did not mean anything to them, he conceded he could see how 'brutal' the turnaround had been on Panama.

"It shows you how brutal football can be, for one side to know they are almost there and then the other side is back in but, at the end of the day, we were here to give everything we have and we said that we are here to win and get three points," Klinsmann said.

"Obviously nobody expected that we would turn this game around in the last one minute but you have got to play all the way to the end and we did that.

"I mean our players gave everything they had and kept pushing and were rewarded.

"Now obviously you feel for the people and the entire country like this and I admire them but this is football and it is not over until it is over."

Klinsmann also expressed his surprise Panama did not sit back and defend after Luis Tejada had put the hosts in front in the 83rd minute.

The German coach said Panama gave his team too much space in the closing stages.

"From a tactical point of view, after Panama made it 2-1, you also have to imagine what is going on in the mind of the Panamanians and their coaching bench knowing what the result in Costa Rica is," Klinsmann said.

"You may be thinking they will drop now and kick the ball in the stands but that didn't happen and they kept coming out and opening space and that space we used in the last moments to score two goals and it is obviously a bitter feeling for a country like Panama to lose in the last minute."