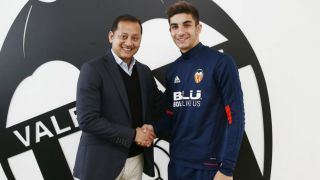 Valencia have announced that highly rated attacker Ferran Torres has signed a new deal with the club.

The 17-year-old has agreed to an improved deal that has reportedly increased his buyout clause to €25million.

The club confirmed the agreement but did not specify the length of deal or the release clause amount.

Torres has been linked with Barcelona and Real Madrid after breaking into the Valencia first team this season.

The Spain youth international has made three substitute appearances in 2017-18, with two coming in the Copa del Rey and one in LaLiga.