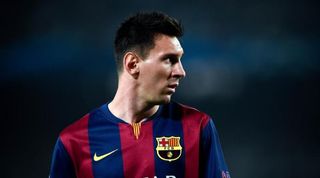 The Barca star was hit by the object in injury time of the La Liga encounter as he and his team-mates celebrated Sergio Busquets' last-gasp goal, which gave the Catalan club a 1-0 victory.

And Valencia have been quick to blast the actions of the supporter, promising to locate the person in question and and hand down a severe punishment.

A statement on Valencia's official website read: "Valencia CF regrets and condemns the isolated incident in the game against FC Barcelona, in which a small, uncapped bottle of water was thrown from the stands at opposition player Lionel Messi.

"The club will endeavour to locate the person who threw the bottle, and they will be banned for life from Mestalla.

"Valencia CF operates a zero tolerance policy on such actions and rigorously enforce all security measures set out by legislation."

Barca stay second in the table as a result of Busquets' winner, while Valencia drop out of the top four and down to fifth.