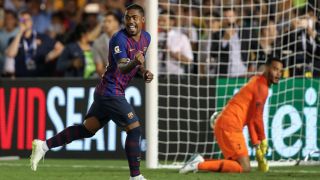 Malcom was praised by Ernesto Valverde after capping his first start for Barcelona with a goal in a 4-2 defeat against Roma in the International Champions Cup.

After coming off the bench and scoring in a penalty shoot-out win over Tottenham last week, former Bordeaux winger Malcom was named in the starting XI on Tuesday and proved to be a handful in Dallas.

Facing the team who he rejected after Barca dramatically hijacked the deal at the last moment, Malcom was on target within four minutes of the second half at AT&T Stadium.

"He is a player that relates well with the game," Barca head coach Valverde told reporters.

"He is a strong player who can get between the lines and it is difficult to move him and he is a player who has a good shot.

"We are happy that this adaptation is quick."

Malcom was set to join Roma after the Serie A side reached an agreement with Bordeaux until Barca jumped in at the 11th hour.

Asked if signing the highly rated Brazilian winger was part of his plans, Valverde said: "The club works to have good players and that's what we're doing.

"I am a part of the club, the coach. But there are people who are dedicated to follow players and Malcom was a possibility. We are delighted with him because we see that he has many possibilities."

A terrific run from Justin Kluivert teed up El Shaarawy for the equaliser 10 minutes before half-time, though Barca were back ahead via Malcom early in the second half.

Barca, however, were upstaged as goals from Alessandro Florenzi, Bryan Cristante and Diego Perotti during the final 12 minutes turned the match on its head.

"We played a good game except in the final stage. It was 75 minutes that we have mastered the game," Valverde said. "I wanted to have certain players with more minutes.

"Even with the youngsters we led. They had a more experienced team. But in general I'm happy."