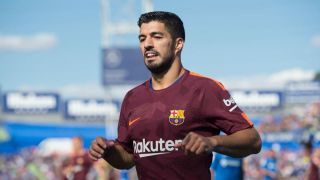 Barcelona coach Ernesto Valverde hopes Luis Suarez can be revitalised after he was benched for Tuesday's thrashing of Eibar.

Lionel Messi scored four as Barca kept up their 100 per cent start to the season with a 6-1 demolition of Jose Luis Mendilibar's men, the Argentine star leading the line with Suarez left on the bench.

Uruguay striker Suarez has suffered a below-par start to the season, scoring once in five games and struggling with a knee injury.

With club-record signing Ousmane Dembele out for four months with a torn hamstring, Valverde needs his remaining attackers firing on all cylinders and the coach hopes a short break for Suarez will bring him back to life.

"I thought it would be good for him to rest [against Eibar]," Valverde told a news conference.

Valverde: "Today we have been able to rest certain players and give playing time to others who needed to play and it turned out well" September 19, 2017

"But he feels OK, and I concluded it would be fine for him to have a little rest and we hope it will help him in every way."

An unlikely source of goals in Barca's last two games has been Paulinho.

The €40million signing from Guangzhou Evergrande Taobao was derided by many Barca fans but a late winner at Getafe and a fine effort on Tuesday have warmed supporters to the former Tottenham man.

"Paulinho has a different profile than other players we have, it's true that our players had a formation for a 'position game' for many years," Valverde explained.

"Paulinho is a more forceful player, a player who comes from deep and he gets to the penalty box following our strategy. We try to cover all our options or have different roles for different games."