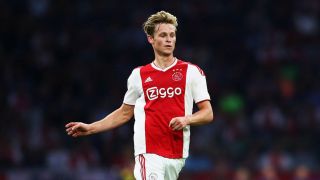 Barcelona's links to Frenkie de Jong and Carlos Vela were brushed aside by head coach Ernesto Valverde, who insisted he was not frustrated while waiting for signings.

Highly rated Ajax midfielder De Jong has been touted as a target for Barca and Manchester City, although Paris Saint-Germain are reported to have stolen ahead in their pursuit of the 21-year-old.

Compared to one of the most sought-after young talents in the world, Los Angeles FC's former Arsenal and Real Sociedad forward Vela would represent a more left-field solution to Valverde's desire for extra cover in attack.

"I insist on the same answers – he's a great player who is on another team," the Blaugrana boss said when De Jong was brought up at his news conference prior to Sunday's LaLiga match against Leganes.

"If I start talking about what's going on in the press, it's not going to go away. I'm not going to comment on this. All the respect to De Jong and Ajax."

A reporter from Vela's native Mexico raised the subject of his future and Valverde apologetically chose to be similarly evasive.

Valverde said: "He's a great player. He's played in our league but we don't normally talk about players from other clubs.

"A lot is said about every name that comes up. I can understand, being Mexican, why you are interested but he plays for another club."

On his search for a centre forward, Valverde added: "No, I'm not frustrated. I know the club is working on possibilities but we'll wait and see. It's not as easy as it might appear.

"We'll see if something can be done and if not we'll carry on with the players that we've got. It's not something that we're thinking about all the time but if a name comes up and we can sign him, it's a possibility."

Any new recruit will hope to fare better than former Bordeaux winger Malcom.

The 21-year-old has been restricted to 10 appearances in all competitions since spurning Roma to move to Camp Nou during the close season, with speculation linking him to Tottenham and the Chinese Super League over recent days.

"Of course he wants to play games and score gaols and that is what I want from him," Valverde said.

"He is a player who has a place here at the club. He's a part of the squad like any other player. He's got certain qualities that we want to see on the pitch

"He is a great player, we want to see him be a decisive player."