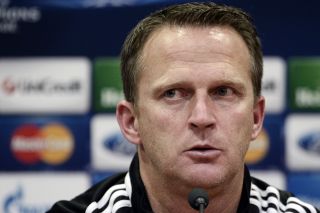 The Group C match, which sent the Greeks into the last 16 of the UEFA Champions League, finished in controversy as Anderlecht had three men sent off.

And Van den Brom, whose side were already out of the competition, claimed that he knew from the outset that they would struggle in Athens.

"Let us start at the beginning - it was soon clear to me that we could not win this match," he said.

Responding to a question about the standard of officiating, he continued: "Whether that was the referee? I'm glad you say so, I don't have to do that.

"Were all the decisions of this man wrong? Yes.

"Anyway, I'm still happy with what my players brought despite all (the) adversity. They continued to look for more. We still believed thanks to two penalty saves.

"Overall, this has just become a disappointing campaign."

Javier Saviola put the hosts ahead shortly after the half-hour mark, before Sacha Kljestan pulled the Belgians level out of nothing before the break.

Cheikhou Kouyate was then dismissed for a second yellow card, with Saviola being denied from the resulting penalty. But the Argentinian made up for it by restoring Olympiacos' lead nine minutes later.

Substitute Vladimir Weiss had a chance to all but seal qualification in the 72nd minute for the hosts, but he found Silvio Proto in inspired form as the goalkeeper kept out another spot-kick, before Fabrice N'Sakala became the second Anderlecht player to be given his marching orders late on.

A third penalty was then awarded and Proto dismissed for his foul on Weiss, while substitute Alejandro Dominguez kept his cool against stand-in keeper Aleksandar Mitrovic to wrap up the win.