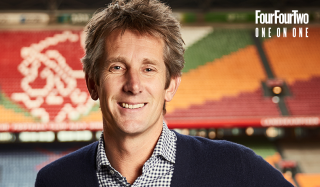 The Dutch shot-stopper dived to his right to repel Nicolas Anelka's kick in Moscow, as Manchester United beat Chelsea after a 1-1 draw at the Luzhniki Stadium.

And the current CEO of former club Ajax reveals in the November 2017 edition of FourFourTwo magazine that he had done extensive research before the final.

“I remember studying a lot of Chelsea’s penalties on DVD before the match," he explains. "So, for example, I think I probably analysed about 40 that Frank Lampard had taken in the past. I had made plenty of notes and noticed that Nicolas Anelka would almost always take his penalties to the goalkeeper’s right.

“Later on, I heard that Chelsea had also done their homework on me and learned that I usually dived to my right. So I think their players were told to shoot to my left, which most of them did [they all did, bar Anelka]. I’d anticipated Anelka would shoot to the other side, and thankfully that is what happened.”

Victory secured a second European Cup winner's medal for the goalkeeper, having been part of the Ajax side that overcame Milan 1-0 in 1995's Vienna showpiece.

But he is no doubt that this was the greatest feeling of his career which stretched more than three decades in as many countries.

“After I had pushed away Anelka’s penalty, I feel like I was separated from the world for a couple of seconds," Van der Sar says.

“I don’t think I’ll ever experience a more ecstatic moment than when I realised we’d just won the Champions League final and noticed all my team-mates running towards me. It was the highlight of my whole career.”

Read the full interview with Edwin van der Sar in the November 2017 issue of FourFourTwo magazine, which focuses on Zinedine Zidane's quest for domination after leading Real Madrid to back-to-back Champions League triumphs. Also this month, we go behind the scenes at the FIFA Interactive World Cup to find out just how serious video games have got, speak to Huddersfield manager David Wagner about the Terriers' miraculous return to the top flight and drinking games with his best bud Jurgen Klopp, learn about the evolution of fan tribes, visit Ireland to watch a Scottish Challenge Cup tie, hear from Kaka about why he turned down Manchester City in 2009, and get clued up about Expected Goals. Order a copy here, and then subscribe!