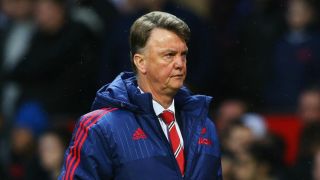 Louis van Gaal has admitted to feeling bored and even angry while watching Manchester United play this season.

The Dutchman has seemingly survived any short-term threat to his job after a torrid December in which the club fell nine points behind Premier League leaders Arsenal and failed to qualify for the knockout stages of the Champions League.

Two good performances against Chelsea and then Swansea City eased the pressure, but another unconvincing performance in the FA Cup third round against Sheffield United - which Van Gaal's team won courtesy of a stoppage-time penalty from captain Wayne Rooney - has the spotlight back on the manager's position at Old Trafford.

Van Gaal said he had enjoyed watching United at times this season, but said his team's inability to break open opposition defences has left him frustrated and bored.

"There are also matches where I'm very bored or angry because we are not disorganising our opponent's defence, but that is football.

"It's not every match that every club is playing fantastically, football that attracts the people. But that is also why the fans are coming. They can criticise but they can also cheer the players.

"They have been ironic [against Sheffield United], but that's also an expression of the fans and that's good. Also the players were frustrated and the fans are frustrated.

"You have to know that as a player, as a manager and the fans that we can't always play fantastic football and that was also the case in former days when it didn't happen. I'm sorry about that but it is like that."

Van Gaal has also come under fire for not getting off of his seat and encouraging players from the touchline, but the manager said he believed communication through the week was more effective.

"I'm not Sir Alex [Ferguson], as you know. Everybody is different and I don't believe in yelling from the sidelines," he said.

Van Gaal's side travel to Newcastle United on Tuesday as they look to get their Premier League campaign back on track.