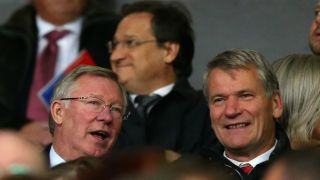 Van Gaal's men sit five points off the Premier League's top four following Saturday's defeat at the hands of Southampton, while they failed to reach the knockout stages of the Champions League as Wolfsburg and PSV proved to be too strong.

The Southampton defeat also saw United fail to score in the first half for an 11th-consecutive home games, with the half-time and full-time whistles met with a furious reaction from the Old Trafford faithful.

Rumours that Jose Mourinho could replace Van Gaal have intensified over the weekend, but Gill - who played a key role in Alex Ferguson's numerous United successes - has called for calm.

"[This is] undoubtedly a season of underachievement. I think everyone would agree with that given the investment that was made.

"Everyone there is working extremely hard to turn that round. It's not easy."

Gill added on Van Gaal's approach: "I don't want to talk about the quality of football, but I'm not going to sit here and say it's that attractive.

"For me, what we did in the past was great but you've got to have the players to do that - the Ryan Giggs running down the wing, [David] Beckham, [Paul] Scholes.

"Manchester United going back to the 1950s with Matt Busby, when I started supporting them, with George Best, they played in a certain way.

"I'm sure we want to do that. We want attacking football I'm sure that will be a key part going forward."