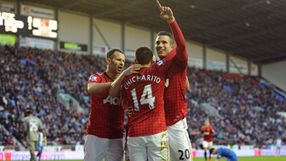 Mancini's Manchester City did their job by winning 3-0 at home to Stoke City but the Premier League champions remain seven points behind rivals United following Van Persie's masterclass, with Tottenham Hotspur up to third after a 3-1 victory over Reading.

Dutchman Van Persie was pinpointed by Mancini in the pre-match build-up as the reason why United may snatch back their title and the former Arsenal hotshot continued 2013 where he left off in 2012, curling in a right-footed beauty just before the break.

A late tap-in – also with his right – took Van Persie's total to 16 league goals this season as the leaders powered on to 52 points from 21 games, their best tally at this stage in six years.

Arch poacher Javier Hernandez, who had one effort ruled out for offside, gave United the lead at lowly north-west rivals Wigan when he slotted the ball in after Patrice Evra's effort was saved in the 35th minute.

The Mexican then grabbed his second after 63 minutes to underline his abilities as an able deputy to the injured Wayne Rooney.

"Wigan are a difficult team to play against, particularly at their own ground, so 4-0 is a good result for us," United manager Sir Alex Ferguson told the BBC.

"The game started slowly but once we got the first goal we were away and we were happy to go in at half-time 2-0 up," added Ferguson.

"Javier Hernandez is a goal-scorer, a real penalty box player. Van Persie's ability is exceptional and his first goal was magnificent - we expected him to be a major player and add something to us and that is exactly what he has done."

The New Year brought a rare goal for City defender Pablo Zabaleta before in-form Edin Dzeko doubled the lead after the break to show Mancini that his strikers are still top class despite the failure to sign Van Persie from Arsenal in August.

Sergio Aguero, who later limped off, squeezed in a penalty to make it 3-0 after Steven N'zonzi had clipped the heels of David Silva - possibly outside the area.

"Today we did a good performance," Mancini told Sky Sports.

An unusually fragile Stoke were completely outgunned by City for most of the first half, much as Aston Villa were at Swansea City as their run of three defeats while conceding 15 goals and scoring none looked set to continue before they sealed a 2-2 draw.

Wayne Routledge rounded the goalkeeper to give the Welsh side a deserved advantage but Paul Lambert's young Villa team summoned some fighting spirit after a difficult few weeks and Austrian Andreas Weimann netted just before the interval.

Christian Benteke then coolly converted an 84th-minute penalty after Nathan Dyer's foul but 16th-placed Villa's victory hopes were denied by a stoppage-time leveller from Danny Graham.