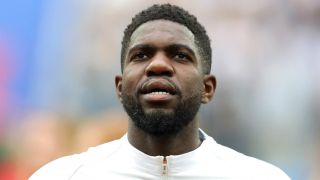 Raphael Varane is confident a niggling knee concern will not keep defensive partner Samuel Umtiti out of France's World Cup semi-final against Belgium.

Umtiti has carried the problem throughout the tournament and was rested for last week's 0-0 group stage draw with Denmark.

The 24-year-old returned for the last-16 win over Argentina and completed another 90 minutes in Friday's 2-0 defeat of Uruguay despite showing signs of discomfort.

Varane, who scored the opener in the latter, believes the Barcelona man will be fit to help contain the likes of Romelu Lukaku in St Petersburg.

"Sam is fine," Varane told reporters on Saturday. "He had a little trouble yesterday after the match, but it's something he knows how to handle.

"He knows the care he has to give. We know each other well and I do not worry too much about that."

Varane's 40th-minute header against Uruguay set France on their way to the final four, although the outcome might have been different had Hugo Lloris not preserved the advantage with a stunning low save from Martin Caceres four minutes later.

The Tottenham goalkeeper came under question after committing a couple of errors in the lead-up to the World Cup, but Varane has full faith in his captain.

"He was amazing. It's reassuring to have a guy like him behind us," the Real Madrid defender said of Lloris.

"We're not surprised, we never doubted him, we knew his qualities. He has confidence and consistency. We hope he will keep doing stuff like that."