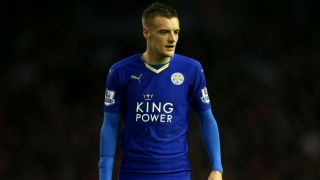 Vardy missed Leicester's 2-2 FA Cup third round draw with Tottenham on Sunday after undergoing a minor operation on his groin.

But the 29-year-old, who is the Premier League's joint top scorer with 15 goals, may make his comeback at White Hart Lane, with Ranieri saying: "Jamie is, more or less one month, one month and a half, is have a problem and he continued to play.

"This morning [Monday] he made warm-ups with the team, and they made a different job, and tomorrow I'll check. I think he could be available."

Winger Demarai Gray made his debut for Leicester against Tottenham and Ranieri was delighted with the 19-year-old's performance.

Ranieri added: "I'm very, very pleased. Of course he wasn't 100 per cent, but if you think he's 19 years-old, only four training sessions with us, the first match in the Premier League - it was the FA Cup, but it was a Premier League team, he was outstanding for me.

"I think he's a very good player for the future.. Now the value is high, but I remember also [Frank] Lampard was very, very high."

Asked if there was a temptation to make a big signing as Leicester push for a Champions League place, he replied: "No, there isn't a temptation.

"Step by step we are building, we are building to try in the future to fight for the Champions League. Now, this is a crazy league and we could fight to achieve the maximum. But step by step.

"There are three, four five teams [further] forward than us. They are building, and then slowly, slowly, we arrive."