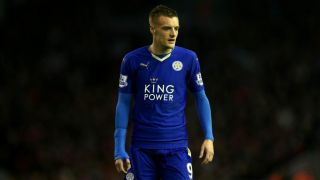 Leicester City striker Jamie Vardy is expected to miss the FA Cup clash with Tottenham Hotspur due to groin surgery, but the club are confident it is a minor problem.

The 28-year-old will undergo the procedure early this week in order to correct a niggling injury which has proven troublesome during the campaign.

Omnisport understands that the striker, who made Premier League history by scoring in 11 consecutive matches earlier this season, should be in contention to face both Tottenham and Aston Villa in next week's Premier League clashes provided the operation goes as planned, though he will sit out the cup meeting with Mauricio Pochettino's side on Sunday.

Manager Claudio Ranieri had already been expected to rotate his starting XI at the King Power Stadium this weekend, meaning Vardy - who struggled with an illness during the 1-0 defeat to Liverpool on Boxing Day - was likely to be among those rested despite his insistence over the weekend that he had no fitness fears.

"Never. Nah. I will be fine, no worries about that. I won't be having a rest," he said.

"The illness last week has all gone now. I couldn't tell you what it was. I was deteriorating by the minute and bed-bound for a couple of days.

"I looked even worse the day after playing Liverpool. It took the wind out of me completely. I couldn't do anything apart from stay in bed."

Leicester have entered something of an attacking slump, having failed to score in their last three matches, including last weekend's 0-0 draw against 10-man AFC Bournemouth which saw them slip two points adrift of league leaders Arsenal.

But Vardy, who has been linked with a possible January transfer due to his excellent form this term, was keen to stress that the squad do not believe they are set for a slide down the table.

"I am sure they said that after we lost to Liverpool but we managed to get a point against Manchester City," he said of his side's critics. "There is going to be speculation and people talking, we just have to let it go in one ear and out of the other and concentrate on ourselves."