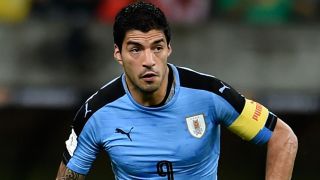 Uruguay edged a step closer to World Cup qualification despite playing out a dull 0-0 draw against Venezuela on Thursday.

Both teams struggled to create clear-cut chances in San Cristobal, the visitors unable to penetrate even with Luis Suarez and Edinson Cavani up front.

The result edged Uruguay closer to Russia 2018, moving them four points clear of fifth-placed Argentina and five ahead of Chile – but the latter two have later kick-offs on matchday 17.

A Jose Gimenez header and deflected Cavani strike were as close as Uruguay went to finding a winner against a Venezuela side who are bottom in CONMEBOL qualifying.

If it is not already, Uruguay can secure their place in Russia when they host Bolivia on Tuesday.

Hit by suspensions and with their World Cup dreams over, Venezuela started a youthful line-up, including impressive goalkeeper Wuilker Farinez, 19, and Sergio Cordova, 20.

For Uruguay, Tabarez named the same starting XI that helped his team past Paraguay 2-1 last month.

It meant a second start for Federico Valverde, who opened the scoring in that win, and a 100th cap for Cristian Rodriguez.

Uruguay looked most dangerous from set-pieces and Farinez made a diving save to keep out a Gimenez header in the third minute.

The visitors struggled to create much of note in the opening 25 minutes, while Venezuela made a decent start.

Suarez and Cavani looked threatening, but the final pass repeatedly let Tabarez's men down in the first half.

The start to the second half was far more lively than the first.

Fernando Muslera was needed to keep Uruguay level, making a save to deny Tomas Rincon from range in the 49th minute.

Cavani then threatened immediately at the other end, but a slight deflection took the Paris Saint-Germain forward's effort wide.

Suarez had a penalty shout waved away in the 70th minute and Cavani fired wide in the closing stages as Uruguay were held.