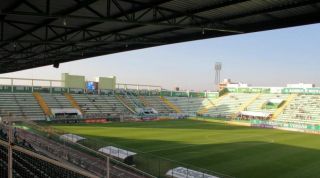 Deportivo Anzoategui climbed to fifth with a 2-0 home win over Trujillanos in the lone Saturday fixture, before La Guaira swooped to top spot with a 1-0 triumph away at Deportivo Tachira.

Anzoategui made it back-to-back wins to shuffle slumping Tucanes to sixth, courtesy of an Edwin Aguilar penalty and an own goal to Trujillanos defender Luigi Erazo.

Aguilar extended his lead atop the goal-scoring charts, as the goal was his 11th of the campaign - two of which have been from the spot.

Imanol Iriberri was the hero for La Guaira, netting in the 75th minute to earn them all three points at Tachira's Estadio Polideportivo de Pueblo Nuevo.

All of Iriberri's five goals this term have come in their past 10 games, the Argentine enjoying one of his more proficient seasons.

Caracas' hopes of winning the Apertura phase were virtually dashed, after they were held 0-0 away to lowly Llaneros de Guanare.

Aragua extended their unbeaten run to eight matches - six of which have been wins - with a 2-0 victory at Atletico Venezuela.

Tucanes are seven points off the pace, after their second straight defeat - a 1-0 loss at home to Estudiantes De Merida.

Petare and new cellar-dwellers Zulia are level on nine points, the latter to face leading La Guaira in the penultimate round.

Zamora continued their stunning surge up the table, their fourth successive win coming in the form of a 2-1 result at Portuguesa - the latter losing for a fourth straight time to be only one point above the bottom two.

Carabobo came from behind at home to Metropolitanos to win 3-1, with Aquiles Ocanto scoring a brace for the winners.