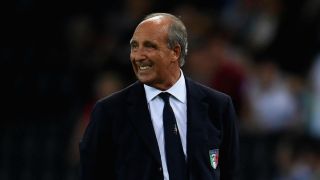 Italy had to wait 34 minutes to make the breakthrough in Sunday's Group G qualifier in Udine, a stunning Lorenzo Insigne volley beating goalkeeper Peter Jehle, with the Napoli forward setting up Andrea Belotti shortly after half-time.

All three of Ventura's substitutes then scored from the bench, Eder toeing home Belotti's cross, Federico Bernardeschi lashing in a long-range drive and Manolo Gabbiadini turning in a low cross from left-back Leonardo Spinazzola.

The comprehensive victory keeps Italy locked together with Spain at the top of the group and head coach Ventura felt the Italians stepped up their game after the interval, but the coach issued a note of caution ahead of his side's trip to Madrid in September.

goals kept the at the top of Group G along with Spain. September's match in Madrid will be decisive!   June 11, 2017

"The first half was a lesson which will help us for the next match which is the one against Spain in Madrid," Ventura told Rai Sport. "When you want to do things in a hurry without thinking you lose your way.

"In the second half, we did things as we had to. The chances and goals came in a flurry. This is what I meant when I spoke about patience, we'll remember this in Madrid.

"The problems weren't the chances, as we created seven or eight clear ones in the second half. I think that the first half was useful in showing us what could be done and we played better after the break."

Sassuolo's Lorenzo Pellegrini made his competitive debut for Italy and he was delighted to be selected alongside experienced midfielder Daniele De Rossi.

"De Rossi was my idol as a child and I still have incredible respect and admiration for him," the 20-year-old told Rai Sport. "To make my senior Italy debut by his side was just wonderful.

"He helped me along with a glance or an odd word, so as well as being a great player, he's also a great person.

"This evening we had the ball at our feet the whole time and had to dictate the intensity of the match, so that was simpler for me to settle in."