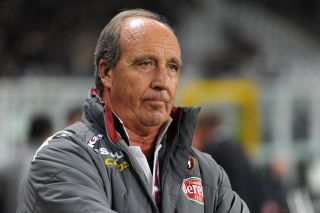 The result extended Inter's record of not losing to the Turin outfit in 19 years, but it could have been a different story had Alessio Cerci converted an early penalty after Inter goalkeeper Samir Handanovic had been sent off for bringing down the forward.

But Cerci saw his spot-kick saved by substitute Juan Pablo Carrizo, and it required a sublime injury-time free-kick from Nicola Bellomo to rescue a point for Torino in an enthralling game.

Ventura lauded his side's first-half efforts, but was disappointed with the way Inter were allowed to come back into the game and felt his players failed to make the most of their numerical advantage.

"We started well, interpreted it properly, hit the post, earned a penalty and scored. For the entire first half we only allowed one chance to Inter.

"We made naive errors in the second half, allowing space for Inter to run into, and we should've been more courageous when a man up. It’s all part of the growth process.

"Inter got back into the game, the mistakes were totally ours. The positive thing is that this team never gives in and really wants to grow, so that is something to build on."

The result leaves Torino in 10th, with 10 points from eight Serie A fixtures.

Ventura will now switch his attention to Sunday's fixture with Napoli at the Stadio San Paolo.