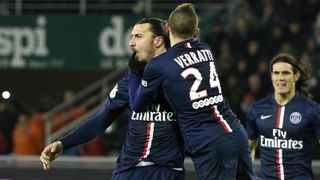 Marco Verratti believes Paris Saint-Germain should have no hesitation in offering an extended contract to star striker Zlatan Ibrahimovic.

The future of the enigmatic Sweden international remains a source of speculation at PSG, with his current deal in the French capital set to expire at the end of this season.

PSG president Nasser Al-Khelaifi told Le Figaro that negotiations with the 34-year-old club-record goalscorer were pencilled in for next month, but Ibrahimovic is unlikely to have a shortage of alternative suitors and he has also discussed the prospect of retiring to end a glittering professional career.

Italy midfielder Verratti has played alongside Ibrahimovic at the Parc des Princes since both men joined the club in 2012 and has no doubt that the former Juventus and Barcelona man remains at the height of his powers.

"If I was president of PSG, I would prolong [his contract] without hesitation," he said in an interview with La Parisien.

"I know Ibra very well. I see him every day in training and, for me, he remains at his strongest."

Verratti was happy to offer clarity on his own future, stating that he has no desire to leave PSG  after 2015-16.

"No, I feel good in this team, so why I change my club?" he said. "There is no problem.

"I do not know [when I will extend my contract]. I want to but you have to ask the president."

One player apparently not so settled in Paris is fellow midfielder Adrien Rabiot.

The France Under-21 international has made 19 appearances in all competitions this season but was branded as disrespectful by coach Laurent Blanc last month when he said he would be open to a loan move in January in order to guarantee regular starts.

"For me, it's better to do 30 games for PSG than 60 in a less strong team - that's the only advice I can give him," Verratti added.

"When I arrived at PSG in 2012, I was young and I did not hold [a regular starting place]. But I learned a lot just by watching great players.

"He still has a lot of years [ahead]. I absolutely love his style and I think he will become a great player. He can bring a lot to the team, but the reverse is also true."