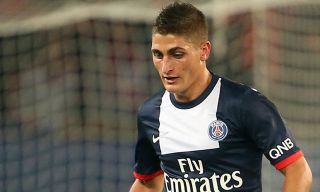 The Italy international midfielder signed a new contract with the Ligue 1 champions in August, a deal that will keep him at the Parc des Princes until 2018.

But the 20-year-old has long been linked with a return to his homeland, with the latest speculation indicating that he could be used as a makeweight to help take Juve's Paul Pogba to PSG.

However, the player's representative has moved to dismiss those rumours, insisting that Verratti is happy in the French capital.

"For the moment, there are only rumours," Verratti's agent Donato Di Campli told TuttoMercatoWeb.

"There's been no contact. He extended his contract with PSG a few weeks ago. Marco's aim is to stay in Paris. Unless the club thinks differently.

Verratti joined PSG from Pescara in July 2012 and has since made 52 appearances for the club.