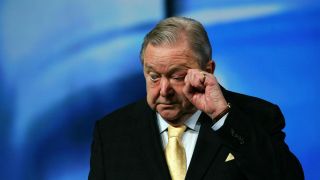 AIK had mascots with a difference for their Allsvenskan game at home to Gefle on Sunday.

Rather than ask local youngsters to accompany the players on to the pitch, the Swedish side instead invited their oldest living members to carry out the duties instead.

The pensioners were led out by Stockholm resident and AIK supporter Lennart Johansson, the former president of UEFA, as part of a campaign to promote ticket discounts and free shuttle buses to and from retirement homes

Johansson said: "There are a lot of us who have lived with AIK all of our lives but who can't, for various reasons, get to the stadium these days. That doesn't mean that we care less about the club. Maybe just that we have a little bit more difficulty travelling and moving around.”

Ake Jigstedt, at 96 years of age the oldest living AIK member, added to the Aftonbladet newspaper: "This is a very classy gesture. I am touched.

"I have been with the association since 1936 and I think this is something special."